Boston, what is called the first city in the United States of America, has the longest history. The origin of American Revolution, the Boston Tea Party, broke out in 1773 at Boston Harbor; the first public beach of the Nation, Revere Beach, established in 1896 in Greater Boston; the first subway system in North America, Tremont Street Subway(now is a part of the MBTA Green Line), opened on September 1st, 1897. It is Fortunate that the oldest part of Boston subways is still providing services to Bostonians in nowadays. The entire public transportation system among the Greater Boston has experienced and undergone many stages, re-planning, re-constructions, and modifications. It’s hard to believe in everyday commuting on the T, we are running on the tracks which were served for hundred years. 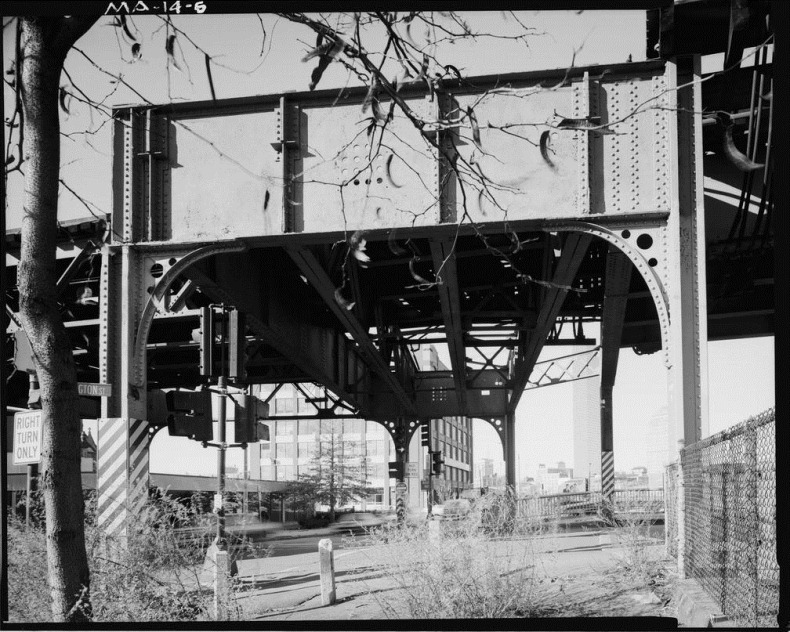 In 1793, a private stagecoach service started running between Cambridge and Boston via the West Boston Bridge, which now called Longfellow Bridge. A Stagecoach is a kind of horse-drawn vehicle provides service to the public. The first transit service in the real sense occurred in 1826, an omnibus line ran between Boston and Cambridge. The real sense transit service indicates that a form of public transportation running on a regularly scheduled basis, and the omnibus is similar to stagecoaches, but it is more like a bus. By 1830, another line was opened ran to Roxbury. These two omnibus lines used the similar routes as the two major subway lines we having now: the Red Line, and the Orange Line.

Time flies to the mid-nineteenth century, the public had a great demand on the public transit due to the increased population during that time. The first street car service was running by horses from Harvard Square to Bowdoin Square in 1856. Begun from this time, street railways expanded rapidly in order to fulfill the great demands by the public, and people were prefer horse railways to the omnibus, it is much more comfortable. While the city of Boston were expanding and transforming from a little mercantile city to a larger business center and established connections with the suburbs as bedroom suburbs, the development of street railways faced a difficult situation that other cities didn’t have: the downtown Boston has only two main streets, Tremont Street and Washington Street. All the traffic from Cambridge, Charlestown, South Boston, Dorchester, West End and Roxbury was merged to these two streets like a funnel. This caused the whole system overloaded and made the traffic in downtown area a mess. Number of riders climbed from 50 million by 1860 to 80 million in 1885. Horses were flooded the city. 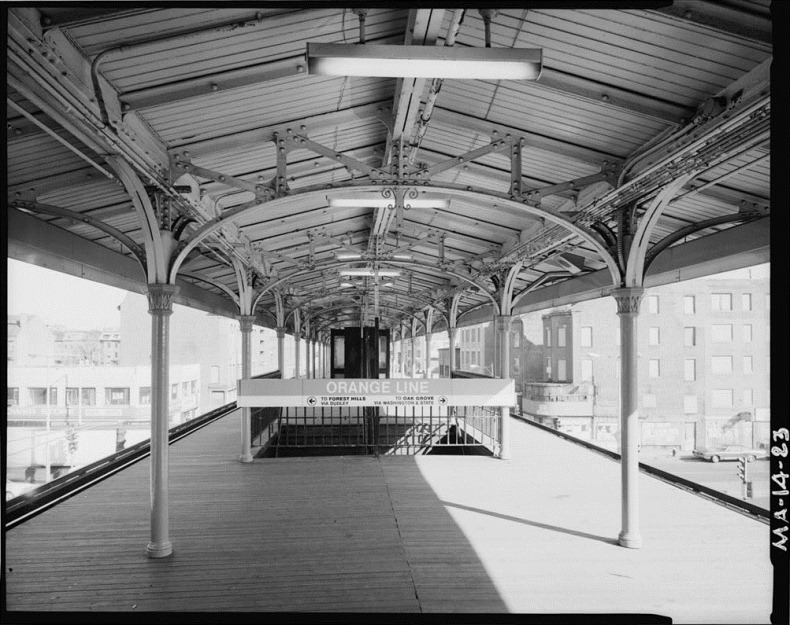 Later on, more problems became obvious to the transportation thereupon: the horse-drawn street cars were unable to travel long distance neither carry too many passengers. “Horse keeping” was also a big issue. The city considered about eht cable car but it does not feasible on Boston’s winding roads. Only until 1887, the first electric streetcar system experiment by Frank Julian Sprague got successes in Richmond, Virginia. Boston finally found a perfect solution to improve the short-coming situation, and electric street cars quickly take the place on the railroad system. More than 90% railroads were running electric street cars by 1892. The electric street car also called a trolley, which uses an over-head power line to operate; this is a kind of mid-size train we now still using on the Green Line light rail lines.

Everything seemed went fine, but did not last long. As the amount of passengers continuously grew, the whole transit system went overcapacity again, and the downtown Boston became a mess for a second time. The city started to think a better solution to deal with the fast growing city. The elevated railroads had taken into account. There were many oppositions argued on the noise and ugliness of elevated railroads, but more and more people were in favor of that because of its breath taking feature: Fast.

After many researches by the Legislature, the city finally issued Statutes of 1894, Chapter 548 and several later Acts that authorized Boston Elevated Railway Company to build subways and elevated railways among the City of Boston. Part of these Acts were:

From this point on, a new transportation system just came.  The Elevated Railways started to spread all over the city. 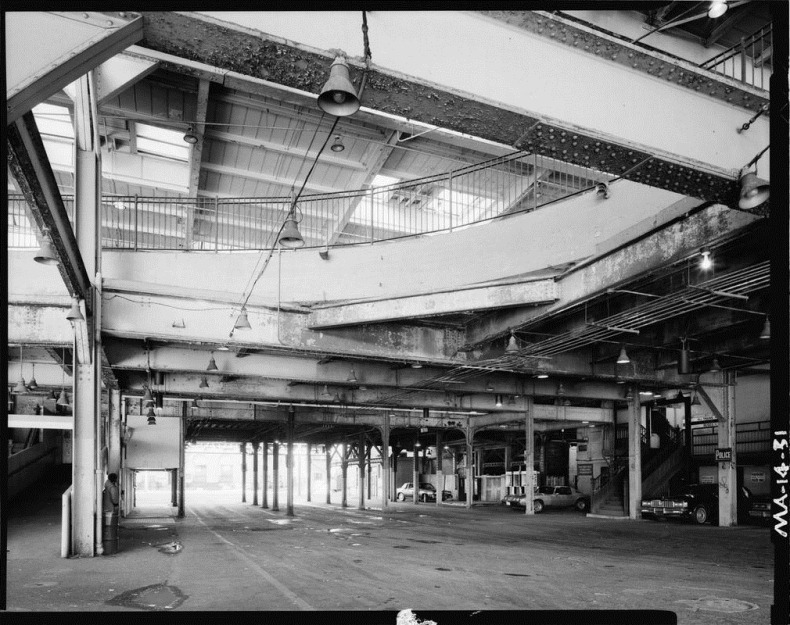 The government required in the Stat 1897 Chap 500 the construction of subways in the center of Boston, Cambridge, and a tunnel to East Boston under Boston Harbor. These subways are the predecessors of the Red Line and Green Line in nowadays. Especially the subway in the center of Boston, Tremont Street Subway, constructions begun in 1895 and first section opened on September 1st, 1897, was the first subway in the United States, was the state-of-the-art.

The Boston Elevated Railway(BERy) expanded really fast from January 23rd, 1899, the first dig, to 1901, the Mainline and Atlantic Avenue loop went on service. By 1904, the entire BERy system(including street railways, elevated railways, and subways) was mainly covered every corner in Boston. It had more than 421 miles (678 km) of tracks.

In 1900, the BERy decided to build a separate tunnel underneath Washington Street in order to relieve the traffic in the Tremont Street underground and opened on November 30th, 1908. In 1903, the authority decided to extend its elevated railway system to Forest Hills and opened on November 22nd, 1909. The Washington Street tunnel and Forest Hills extension were gradually became what we are riding now a part of Orange Line. In the same year as Forest Hills Station opened, the construction of Cambridge Subway begun as well. This long subway across the whole Cambridge is exactly what the Red Line using now. In the later years, the development of rapid transit system was more and more like the miniature of contemporary MBTA rapid transit system. 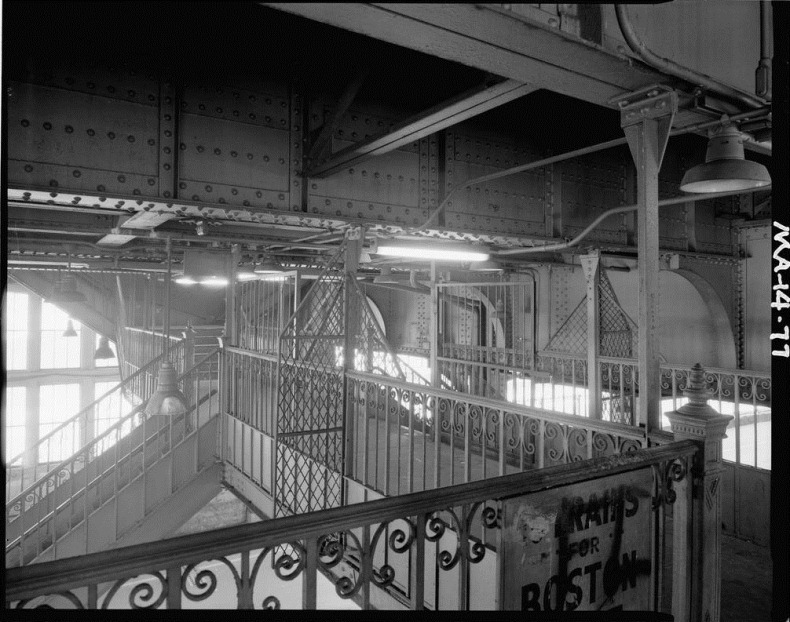 Changes came to the Boston public transportation again during the following decades in twentieth century. The automobile industry had a great development, thus a new kind of vehicle was in vogue, the bus. The first bus route ran between Central Square and Oak Square in 19223, and it became the route 64 as the MBTA operates nowadays. The convinces and flexibility made Bostonians in favor of buses, and since then, the BERy started to replace trolleys with buses or trackless trolleys. By 1985, only several street railways remaining in service, those routes are basically today’s Green Line branches. During that time, more and more households owned personal automobiles, this caused a great decline on ridership of the public transportation. Street Railways were being removed from streets, and Elevated Railway services were being cutback.

Finally in 1960s, the Massachusetts Bay Transportation Authority (MBTA) created and started in charge of rapid transit, bus, commuter boat, and commuter rail among the greater Boston. The layout of public transportation was substantially shaped up by the end of twentieth century:

-    The Green Line (A, B, C, D Branches) and Mattapan High Speed Line: the only trolley street car services left;
-    Orange Line: used to be the Main Line of Elevated Railway Services and modified, extended and reconstructed;
-    Red Line: was the combination of Cambridge subway and extension to Quincy area;
-    Blue Line: converted from East Boston subways and railways.

During late twentieth century and beyond, only small modifications have been made to the MBTA system. The Green Line A Branch replaced by route 57 bus in 1969; and the E branch suspended its service between Heath Street and Forest Hills(Arborway) since December 28th, 1985. In 2002, the Silver Line has introduced to the public. This is a BRT (bus rapid transit) service along Washington St. and sooner extended to Airport and Waterfront. 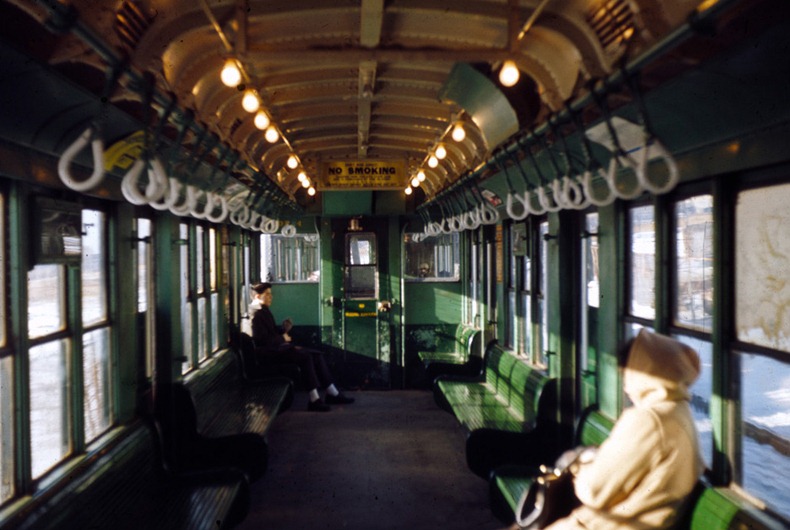 In recent years, many renovation projects have applied to the system in order to generate a modern public transportation system in twenty-first century. At the same time, some suggestions of extend the service to further places are being considered, like the Green Line E Branch Lechmere extension and the Blue Line Bowdoin extension. The oldest city in the United States is keeping itself advanced with the time.